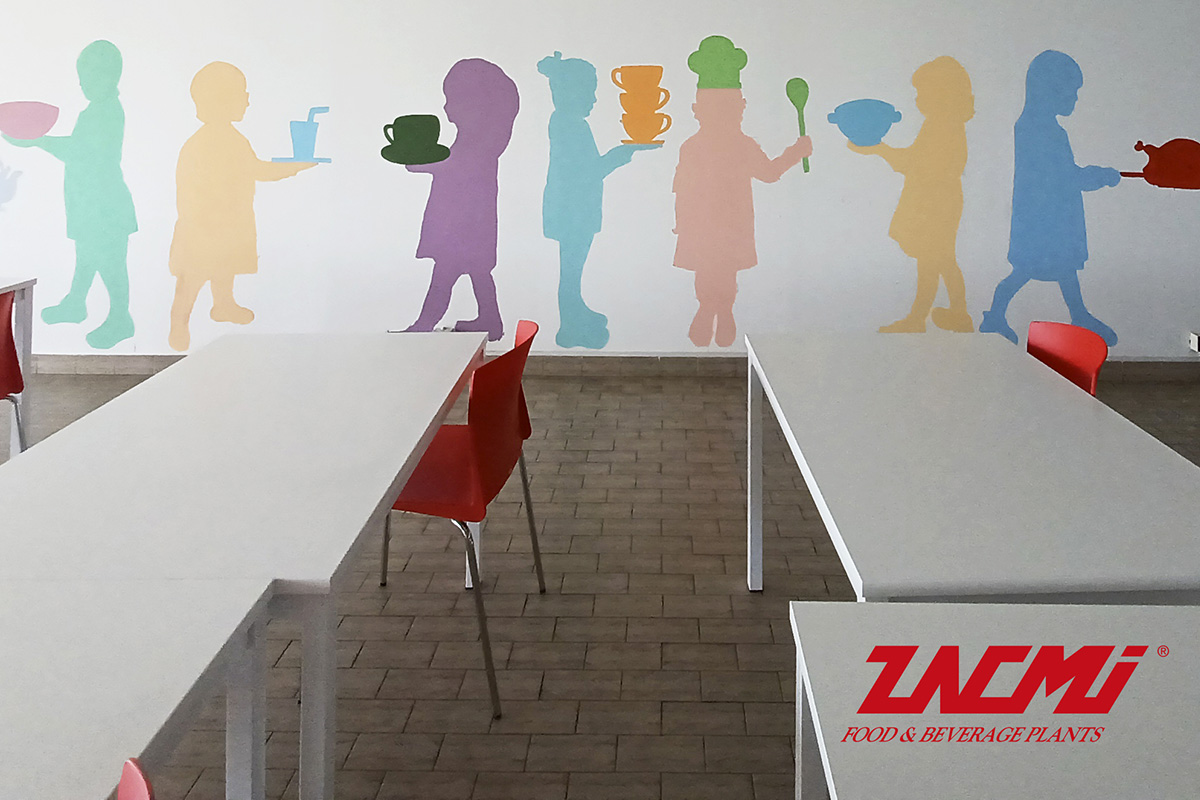 A contribution that leaves its mark.
When local schools and companies intertwine their activities and join together in a common project, the world immediately becomes more colourful:

Creating a community means making a bond, even between different generations and amongst apparently distant worlds such as work and education.

The “Monumento ai Caduti” kindergarten in Via Marco Emilio Lepido, Parma, has started a project in collaboration with ZACMI Company directly including the girls and boys of the school, aimed at developing children’s expressive talent and cheering the lunch breaks of company staff.

ZACMI – renowned Company in Parma, specialised in the construction of filling, closing and processing lines for the food and beverage industry – hosted the kindergarten children, at their headquarters in Via Mantova, as creative artists. This Spring, the young pupils, armed with colours and paintbrushes, became painters decorating and colouring the white walls of the ZACMI canteen.
It is thanks to these girls and boys that today the canteen room is filled with the coloured shapes of children, to express their cooking creativity and to remind the ZACMI team of the richness and colour in the community of which they form a part.

In fact, the idea came from the desire to brighten up the environment dedicated to employee lunch breaks and at the same time involve local schools. The choice therefore fell on this kindergarten that accepted the invitation with pleasure.

So the children left not only a symbolic mark, but one that can be felt; as well as being the authors, they are the protagonists in the murals realised with their own shapes! A moment of artistic expression, but also the enhancement of the class, of each single individual, personalising the murals with their own colour and style.

The educational project of the school, which began in September 2021 with the participation in a fundraising charity event “the army of coloured silhouettes”, arranged in Parma for a new software for the Breast Centre of the Maggiore Hospital, ended with this second group of shapes that will remain painted on the wall to colour and brighten the lunch breaks of ZACMI employees.

Once more, value was given to creativity and collaboration, in a lively path that unites companies with the territory and the entire community.